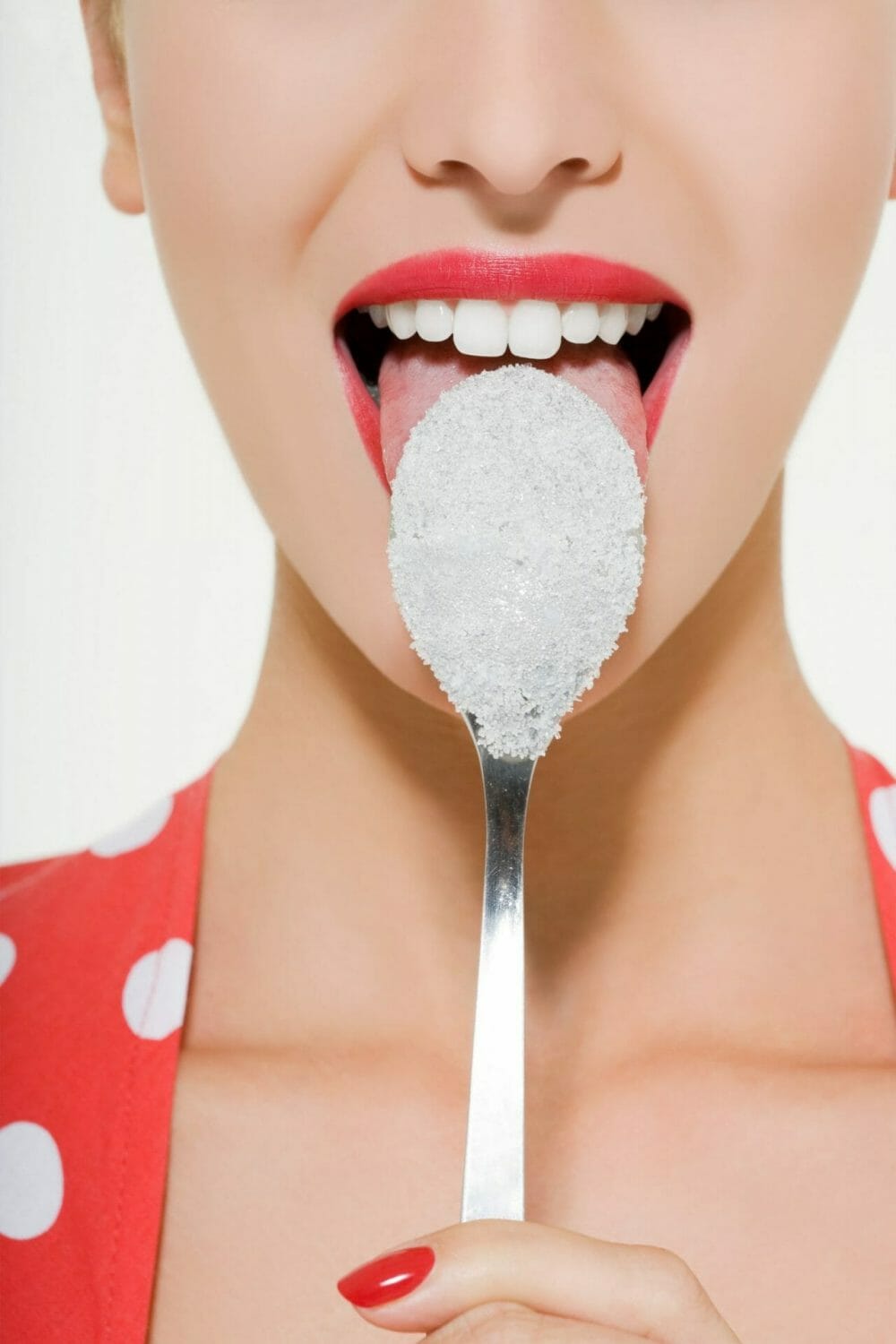 Sugar & Spice (And What’s Not Nice For Your Brain)

Eating a balanced diet is vital for good health and overall wellbeing. Food provides our bodies with the energy, protein, essential fats, vitamins, and minerals to live, grow, and function properly. Sugar and salt are present in many, if not all, of the foods that we consume as part of our everyday diets. Although both play several essential roles in our health (the brain needs sugar for energy, and muscles need salt to contract, for instance), they can also lead to a variety of adverse health conditions when consumed in excess.

One in every five calories that Canadians consume comes from sugar. This dietary sugar may occur naturally (for instance, in fruit, vegetables, and milk) or it may have been added to foods and beverages to improve palatability. According to Statistics Canada, Canadians consume an average of 110.0 grams of sugar a day – the equivalent of approximately 26 teaspoons. This figure amounts to 21.4% of Canadians’ total daily calorie intake.

The World Health Organization recommends a daily maximum of 10% of calories from “free sugars” (i.e. sugars added to foods by the manufacturer, cook, or consumer, as well as sugars naturally present in glucose, fructose, honey, and fruit juices), which translates to approximately 12 teaspoons. The American Heart Association (AHA) recommends no more than 6 teaspoons (25 grams) of added sugar per day for women and 9 teaspoons (38 grams) for men. Many popular drinks have more than half of the recommended daily sugar intake. For instance, one can of pop typically contains about 10 teaspoons of added sugar.

High-sugar diets have been associated with an increased risk of numerous diseases, including heart disease, stroke, obesity, diabetes, high blood cholesterol, and cancer. “We know that excess sugar is not good for the body or the heart and we also know that having risk factors for heart disease is also bad for the brain,” says Dr. Matthew Pase, Senior Research Fellow at Melbourne Dementia Research Centre in Melbourne, Australia. Dr. Pase and his colleagues sought to investigate just how detrimental sugar is for the brain and, specifically, the ways in which sugary beverage intake impacts the brains of those with preclinical markers of Alzheimer’s disease.

The study, published in the September 2017 issue of Alzheimer’s & Dementia, involved nearly 4,000 participants with an average age of 54 who completed a food frequency questionnaire and underwent magnetic resonance imaging (MRI) scans. The researchers found that the participants who more frequently consumed sugary beverages tended to have smaller total brain volumes, poorer memory, as well as smaller hippocampal volumes – which is particularly noteworthy because the hippocampus is one of the first areas that is affected in Alzheimer’s disease.

A different team of researchers from Australia sought to examine the impact of sugary beverages on the early-life brain, using a rodent model. Their study, published in the January 2016 online issue of Frontiers in Molecular Neuroscience, found that early-life exposure to high amounts of sugar produced the same ill effects on the brain as early-life traumatic experiences (namely, lesser brain volume, inflammatory effects to the hippocampus, and the misprocessing of the stress hormone cortisol). Additionally, both learning capacity and memory function were compromised by the consumption of a high-sugar diet.

More research needs to be conducted to better understand the relationship between sugar, mental health, and physical brain health. Some studies have suggested that high sugar intake is linked to greater instances of depression – a finding that is particularly concerning in light of the fact that many young adults are eating too much sugar at the same time that mental health concerns among this segment of the population are on the rise.

Many individuals who consume too much sugar are also consuming too much saturated fat. According to a study published in Frontiers in Behavioral Neuroscience in 2017, consumption of a “Western Diet” (a diet that consists of both high levels of saturated fat and added sugars) negatively impacts cognitive function. The hippocampus – a brain region associated with the control of certain learning and memory processes – appears to be particularly vulnerable to the deleterious effects of a Western Diet.

The researchers suggest that the Western Diet’s negative effects on the brain might be the result of a disturbance of the gut microbiome (the collective genome of microbes residing in the gastrointestinal tract). In rodent studies, the gut microbiome was “profoundly altered by early life sugar [consumption],”notes Dr. Scott Kanoski, one of the study’s authors and Assistant Professor of Biological Sciences at the University of Southern California. The microbiome is a “very new field of research,” says Dr. Kanoski, so more research needs to be conducted in order to determine how it relates to brain outcomes.

To date, researchers have not conclusively proven a cause-and-effect link between sugar and cognitive impairment. While we know that dietary factors are associated with memory and cognitive impairments in humans, “what’s harder to do is to isolate specific dietary factors,” says Dr. Kanoski. Nevertheless, Dr. Kanoski (amongst others) believes that limiting intakes of simple sugars is a good idea “not just for brain outcomes, but also for metabolic outcomes, which are of course linked.”

According to Statistics Canada, the majority of Canadians are consuming nearly twice the recommended intake of salt every day – approximately 3,400 mg, far exceeding the recommended limit of 2,300 mg. Both of these numbers are consistent with those in the U.S. While our bodies require a small amount of sodium to be healthy, too much can lead to adverse health consequences, including an increased risk of developing cardiovascular diseases, osteoporosis, and stomach cancer.

“The danger of salt is not so much the salt that comes from the shaker, but that salt that is embedded in the food we eat. Processed foods use an extraordinary amount of salt,” says Dr. Costantino Iadecola, director of the Feil Family Brain and Mind Research Institute and a Professor of Neurology and Neuroscience at Weill Cornell Medicine. “In population studies, [communities that] consume higher levels of salt tend to have more strokes, more vascular problems, and more dementia.”

In order to better understand why this is the case, Dr. Iadecola and his colleagues performed several experiments with mice, where some were fed a high-salt diet (comparable to the excessive proportion of salt found in some human diets). Within a few weeks, the salty diet led to dysfunction of endothelial cells (the cells that line blood vessels and modulate vascular tone), a reduction in cerebral blood flow, and cognitive impairments in several behavioural tests, without any changes in blood pressure. However, when the mice were returned to a normal diet, both brain blood flow and cognition improved, suggesting that the effects of excessive salt consumption could be reversed.

Notably, the salty diet also increased the numbers of T Helper 17 (TH17) white blood cells in the gut and increased the levels of a pro-inflammatory molecule these cells release, called the interleukin 17 protein (IL-17). Once in the bloodstream, IL-17 interacts with the brain’s endothelial, vascular cells, inhibiting “the ability to produce a critical chemical called nitric oxide that the brain needs to work correctly,” explains Dr. Iadecola.

The researchers found that it was this increase in IL-17 in the bloodstream (and corresponding lack of nitric oxide) that caused the high-salt diet’s negative effects on cerebrovascular function and behaviour. In a final experiment, the researchers treated the mice with a drug known to increase the level of nitric oxide in endothelial cells, called ROCK inhibitor Y27632. The drug reduced circulating levels of IL-17 and the mice showed improved behavioural and cognitive functions. “[D]espite being on the high-salt diet, [the mice] did not develop dementia,” says Dr. Iadecola, which means that there could be some interesting pharmaceutical developments in the future as a result of these findings. This study was published in the January 2018 issue of Nature Neuroscience.

While much more research is needed before any definitive link can be made between cognitive impairment and high-salt and high-sugar diets, these findings highlight the importance of cutting out excess salt and sugar from our diets.