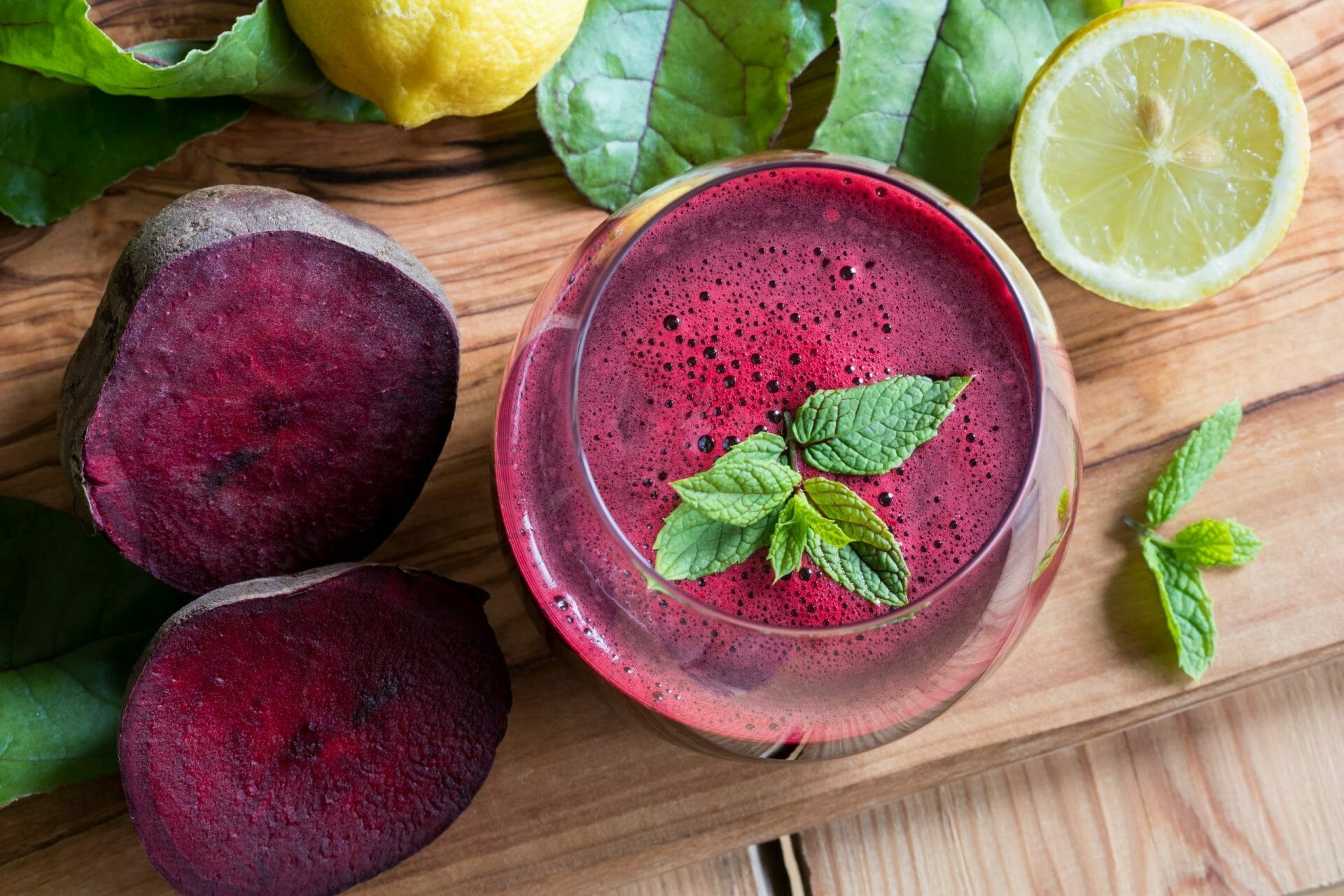 The Root To Better Brain Health

Beetroots, commonly known as beets, are a popular root vegetable used in many cuisines across the globe. While you may not find them on your typical grocery list, beets are packed with essential vitamins, nutrients, and plant compounds, making them one of the healthiest vegetables that you can consume. Adding more beets to your diet can help boost longevity, from aiding weight loss to preventing chronic diseases (such as cancer), and can even help improve mental and cognitive function.

According to Leslie Beck, one of Canada’s preeminent registered dieticians and author of several books about food and health, including The Plant-Based Power Diet, “beets, due to their bright red colour, are an excellent source of antioxidants,” which are compounds that fight inflammation in the body. Specifically, beets contain the antioxidant polyphenols and betalains, the former of which is a phytochemical (a compound naturally produced by plants, which is thought to provide several health benefits) and the latter of which is a naturally occurring pigment responsible for the red colour of the beet vegetable.

Research published in 2001 in the Journal of Agriculture and Food Chemistry identified betalains as a new class of antioxidants and suggested that “red beet products used regularly in the diet may provide protection against certain oxidative stress-related disorders in humans.” In light of the fact that recent research has shown a connection between inflammation and the occurrence of dementia, anything that fights inflammation in the body and the brain is a step in the right direction.

Nutrient wise, beets are a great source of the B vitamin, folate, “which helps to make and repair DNA in the body, and is a good source of potassium, which helps to keep blood pressure in check,” says Beck. They are also high in dietary fibre and in betaine, which, according to research published in The American Journal of Clinical Nutrition, has been found to maintain liver, heart, and kidney health, as well as is an important nutrient for the prevention of chronic disease.

BEETS AND BRAIN HEALTH: WHAT DOES THE RESEARCH SAY?

Recent research presented at the American Chemical Society’s national meeting in March 2018 found that betanin, a subset of the antioxidant betalain category, “shows some promise as an inhibitor of certain chemical reactions in the brain that are involved in the progression of Alzheimer’s disease.” While the precise cause of Alzheimer’s disease remains unknown, one of the prime suspects is a protein called beta-amyloid that accumulates in the brain and disrupts communication between brain cells (i.e. neurons). Researchers are now hypothesizing that much of this damage occurs when beta-amyloid attaches itself to metals such as iron and copper, which can cause beta-amyloid peptides to bind together in clumps. This, in turn, can promote inflammation and oxidation, ultimately killing surrounding neurons.

“There is often a high amount of copper, or iron, present in the plaques of patients with Alzheimer’s,” says Cole Cerrato, a PhD candidate in the Department of Chemistry at the University of South Florida. “[U]nregulated metals in the body don’t tend to do what you want them to do.” For instance, they can accelerate the accumulation of beta-amyloid proteins, as well as create oxidation in the brain, which is damaging to the brain as a whole.

Cerrato and his doctoral supervisor, Dr. Ming, added betanin (a compound found in beets) to copper-bound beta-amyloid mixtures in the laboratory, and found that doing so reduced oxidation by as much as 90% – in essence, seemingly neutralizing the beta-amyloid’s negative effects. “[It is] always the well-regulated chemistry that our bodies need and we found that it is the unregulated chemistry that betanin seems able to prevent,” notes Cerrato. While more research needs to be conducted, this compound could potentially be used as part of a drug for Alzheimer’s sufferers in the future.

Other scientific research published in the Journals of Gerontology: Medical Sciences in 2017 examined the impact of beetroot juice on the aging brain. Researchers out of Wake Forest University in North Carolina wanted to determine how beetroot juice, combined with exercise, affected the brains of hypertensive older adults. It is well known that exercise has positive effects on overall health, including brain health. Individuals with high blood pressure, for instance, are encouraged to exercise in order to lower their blood pressure and to maintain cardiovascular health, which we know is linked to brain health.

As Beck observes, anything that keeps the heart healthy, keeps the brain healthy. Accordingly, the researchers provided participants (aged fifty-five and older) with a beetroot juice supplement before they engaged in a moderately vigorous 55-minute treadmill walk in order to determine whether beetroot juice had a better effect on brain neuroplasticity (the ability of the brain to form and reorganize synaptic connections) than exercise alone. Participants engaged in the treadmill exercise three times a week over the course of a six-week period. Using functional magnetic resonance imaging (MRI) scans, the researchers found that the beetroot juice supplement, which contained dietary nitrate, combined with exercise improved brain function in subjects. In particular, connectivity between brain regions was improved.

Supplementing with beetroot juice “makes the brains appear more similar to those of a younger adult,” says Dr. Daniel B. Kim-Shapiro, Director of the Translational Science Center: Fostering Independence in Aging at Wake Forest. “The active ingredient in the beet juice is nitrate, which gets converted to nitrite, and eventually to nitric oxide” by the body, says Dr. Kim-Shapiro. “In the end, it’s the nitric oxide that’s though to be active.” Nitric oxide is a vasodilator, which means that it increases blood and oxygen flow, including flow to the brain.

Earlier research conducted by Dr. Kim-Shapiro and his colleagues, published in the journal Nitric Oxide in 2011, found that a high-nitrate diet – which included both drinking beetroot juice and eating beets – improved the regional brain perfusion (blood flow) in older adults in critical brain areas known to be involved in executive functioning.

OTHER HEALTH RESEARCH ON BEETS

In the past decade, there has been an ever-increasing amount of research focusing on the compounds contained in beetroot juice and beets. Supplementing with or consuming beets and beetroot juice (high in dietary nitrate) has been found to enhance the physiological response to exercise, such as muscle efficiency and oxygenation, according to a paper published in Sports Medicine in 2014.

Similarly, 2012 research published in the Journal of the Academy of Nutrition and Dietetics examined whether beetroot consumption could improve running and overall athletic performance. Although the study was relatively small, the researchers found that whole beetroot improves running performance in healthy adults. Additionally, research published in Nutrients in 2017 found that beetroot juice supplementation improved the cardiovascular performances of athletes.

HOW TO ENJOY BEETS AND BEETROOT JUICE

“Beets are just one part of a healthy diet, and we just don’t have the data yet to say that beets should be included in the diet X times per week for optimal health,” says Beck. Nevertheless, including beets in one’s diet a few times a week or even every day has been recommended.

While cooking beets can sometimes be labour intensive and even messy, grating them raw is a tasty way to enjoy this so-called “superfood,” or you can purchase pickled beets and snack on them (although this option would have a higher sodium content). For those more adventurous, you could try making your own beet chips by thinly slicing beets and adding a bit of olive oil and salt.

Whether juiced raw, cooked, pickled or fermented, beets offer a wide array of health benefits, and may be the root to better brain health.