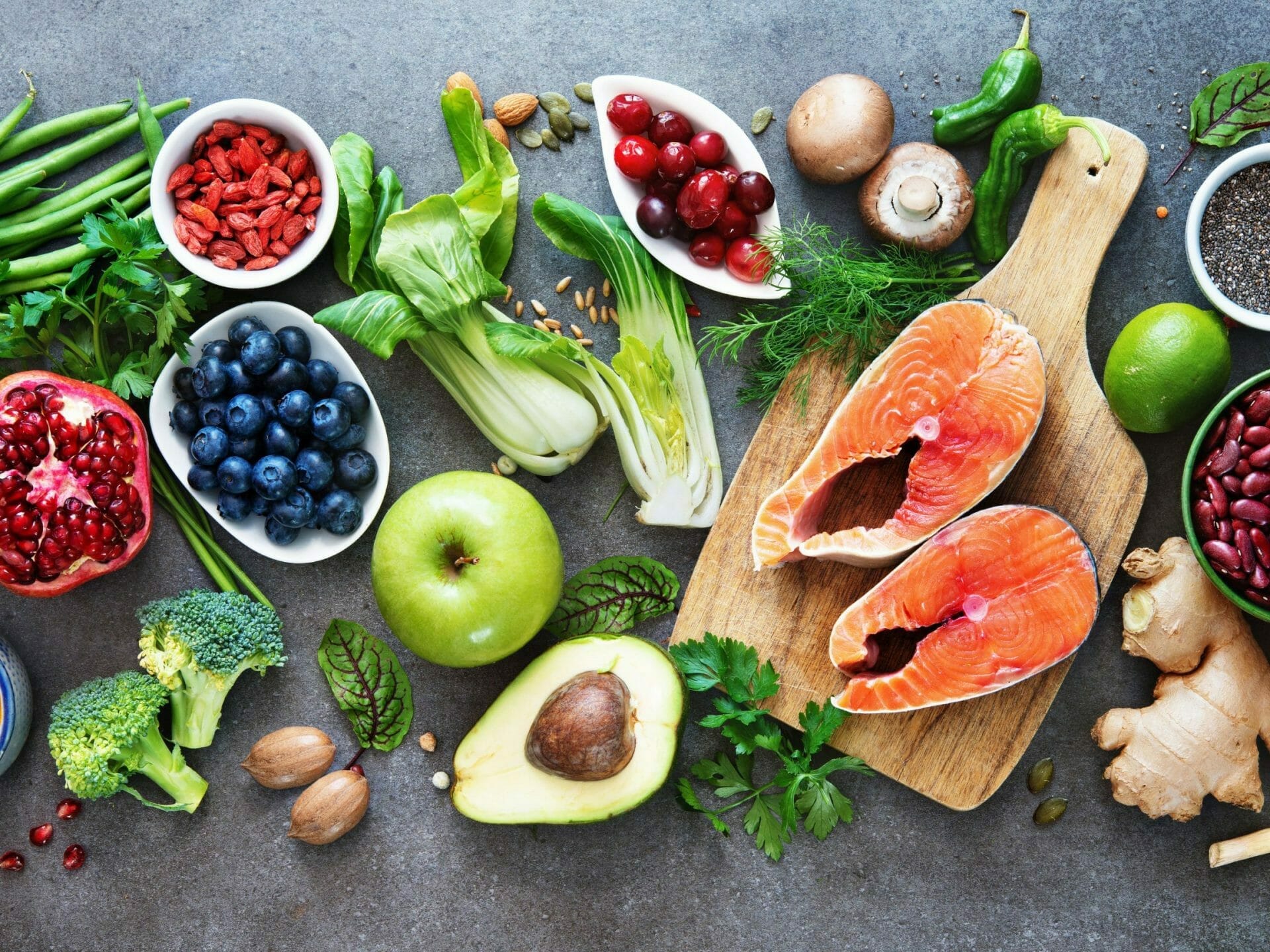 Memory Morsels 4 weeks ago
WHAT SHOULD A WOMAN EAT TO HELP KEEP HER BRAIN FIT?

There is mounting research that what you eat has a significant impact on the health of your brain. In the second issue of Mind Over Matter®, we highlighted some of the research in support of the “MIND” diet – a hybrid diet combining factors of the Mediterranean diet and the Dietary Approaches to Stop Hypertension (DASH) diet, which includes consuming whole foods such as fruits, vegetables, and whole grains, as well as nuts and seeds (for their good fats and vitamin E content) and fish and legumes (for protein sources).

Just as important as what you eat is what you should not eat. Reducing consumption of red meat, cheese, margarine or butter, and sweets, as well as processed and fast foods, is crucial.

In the ninth issue of Mind Over Matter®, we wrote about the importance of paying closer attention to dietary needs as you age, since older adults’ bodies undergo organ, hormonal, and insulin-related changes, as well as lose muscle mass. Older adults need less calories per day than their younger counterparts and can eat less overall, but nutrient requirements do not change with age – meaning that healthy food choices are even more important.

A LACK OF RESEARCH FOCUSED ON WOMEN

Historically, most research (including nutrition research) has been conducted on male subjects, and biological (sex-based) and socio-cultural (gender-based) variables have been largely neglected. Fortunately, this has started to change in recent years with the National Institutes of Health (in the U.S.) and the Canadian Institutes of Health Research mandating researchers to integrate sex and gender into their research designs when appropriate.

We now know that women will need to pay closer attention to gener- alized diet and lifestyle findings related to Alzheimer’s disease (AD) due to the staggering Alzheimer’s disease statistics. “Two-thirds of people with Alzheimer’s are women, and two-thirds of caregivers are women, and caregiving for someone with dementia increases one’s risk of developing dementia,” said Dr. Nathanial Chin, Director of Medical Services for the Wisconsin Alzheimer’s Disease Research Center. Even in cases where a genetic component to AD has been identified in individuals (namely, the APOE-e4 gene), women with the genetic risk are more likely to develop the disease than men with the same genetic risk, noted Dr. Chin. “The sheer numbers should tell women, ‘I have to be extra vigilant,’” said Dr. Chin.

WHY WOMEN ARE AT GREATER RISK FOR ALZHEIMER’S DISEASE

Researchers are beginning to uncover why women are more vulnerable to AD. A woman’s intricate hormonal system is deeply connected to the brain’s functionality throughout the lifespan. “The hormones inextricably involved with our sexuality turn out to be just as crucial in the overall functioning of our minds,” noted Dr. Lisa Mosconi, Director of the Women’s Brain Initiative and Associate Director of the Alzheimer’s Prevention Clinic at Weill Cornell Medical College/NewYork-Presbyterian Hospital, in her new book entitled The XX Brain: The Groundbreaking Science Empowering Women to Maximize Cognitive Health and Prevent Alzheimer’s Disease.
Dr. Mosconi and her colleagues also published findings of their research in the June 2020 issue of Neurology that found that meno- pause was strongly associated with brain biomarker differences consistent with AD.

MENOPAUSE SEEMS TO BE AN IMPORTANT MOMENT NOT JUST FOR A WOMAN’S HORMONAL SYSTEM,             BUT ALSO FOR HER BRAIN.

The “ebb in hormones” causes the loss of a key protective element in the female brain. “In fact, diminishing hormones are known to accelerate the aging process,” Dr. Mosconi observed. Alzheimer’s disease does not emerge randomly or quickly; rather, it is “the result of a number of genetic, medical, and lifestyle events that have been happening along the way,” and menopause, for some (not all) women, appears to be a catalyst.

While lifestyle changes – including, very importantly, diet – make a substantial difference on brain health for pre-menopausal and post-menopausal women, those approaching midlife have “a critical window of opportunity,” according to Dr. Mosconi, “to intercede with strategies to reduce or prevent that risk.”

Dr. Chin agrees: “We see this increase in risk at menopause or later. If there’s ever a time for you to say okay, I really need to adjust the foods I’m eating, my level of activity, and my sleep, menopause should be that trigger.” He continued, “no offense to the cardiologists, [our brain] is the most important organ in the body.” The brain “receives and uses over 20% of the blood flow, which means oxygen as well as sugar.”

As an organ, the brain is also highly dependent on the food that we consume for good functioning because brain cells are “irreplace- able,” noted Dr. Mosconi. The brain cells that we start with, more or less, are the ones that we have all through the lifespan, whereas the cells of other organs can replace themselves.

OF ALL THE ORGANS IN THE BODY, THE BRAIN IS THE MOST VULNERABLE TO THE RAVAGES OF A POOR DIET.

WHAT DIET BENEFITS WOMEN THE MOST

So, what should women eat? Most importantly, stay away from all the trend diets, suggests Dr. Mosconi in her book The XX Brain, including keto, gluten-free, and fat-free diets or veganism, unless, for example, you are celiac (in which case, you have to avoid gluten). None of these diets “adequately consider the female physiology,” she writes. One diet severely limits healthy carbs, and another reduces fat, while still another substantially reduces protein. “Let’s be clear that the body and brain alike need all kinds of nutrients for health, carbs and fats included.”

Dr. Mosconi recommends the Mediterranean diet, which has been proven effective for brain health, heart health, and generalized longevity. The American Heart Association recommends the Mediterranean diet for heart health, along with the DASH diet, and we know that heart disease and stroke are risk factors for vascular dementia or AD. A 2013 study published in the Journal of the American Heart Association found that in postmenopausal women, cardiovascular disease, hypertension, and diabetes were all associ- ated with a higher risk of cognitive decline.

Additionally, the Mediterranean diet has been found to improve the gut microbiome. Recent research published in the July 2020 issue of Gut found that eating a Mediterranean diet for a year improved levels of frailty and overall health in older adults between the ages of 65 and 79. In several recent studies, the health of the gut’s delicate microbiome has been linked to Alzheimer’s disease proliferation.

One study published in the Journal of Neurogastroenterology and Motility in 2019 found that “there is increasing evidence for the gut microbiota contribution to the pathogenesis of AD.” Previous issues of Mind Over Matter® have also covered this topic in depth.

WHAT IS BECOMING CLEARER IS THAT GOOD HEART HEALTH, GUT HEALTH, AND GENERAL HEALTH IS LINKED WITH A DECLINE IN ALZHEIMER’S RISK, AND DIET PLAYS A SIGNIFICANT ROLE IN ALL OF THESE SYSTEMS.

A woman’s hormonal system, as we have seen, appears to be part of the reason why Alzheimer’s disease disproportionally affects women. During menopause, estrogen levels decline considerably, and consuming foods that contain phytoestrogens, such as soy, has been shown in studies to help women with menopausal symptoms because they convert “to usable estrogen in our human bodies,” writes Dr. Mosconi. An article published in 2018 in the International Journal of Nutrition Sciences found that the use of phytoestrogens and their dietary sources such as soybeans can be beneficial in the prevention of Alzheimer’s disease because of the way in which they positively impact brain cells.

Soy is a great source of phytoestrogens, but you need to make sure that it is organic, preferably fermented (as opposed to genetically modified and pesticide-laden soy), and do not consume more than two servings a day. Men may want to avoid consuming foods with too many phytoestrogens, as one study published in Nutrients in 2019 found that speed of processing in the brain declined in older men with high urinary levels of phytoestrogens, while it improved in women.

THE IMPACT OF DIET ON MENTAL HEALTH

How a woman’s diet impacts her brain health goes beyond the severity of AD.

A STUDY PUBLISHED IN 2018 IN NUTRITIONAL NEUROSCIENCE FOUND THAT COMPARED WITH MEN, WOMEN MAY NEED A MORE NUTRIENT-RICH DIET, AS WELL AS A HEALTHY LIFESTYLE (E.G. REGULAR EXERCISE), TO EXPERIENCE “MENTAL WELLBEING.”

Dr. Lina Begdache, an Assistant Professor at Binghamton University’s Decker College of Nursing and Health Sciences and the lead author of the study, surveyed individuals internationally about diet and mental health status.

Dr. Begdache and her colleagues categorized the participants’ eating patterns as healthy, moderately healthy, or very unhealthy, and then looked at levels of anxiety and depression in women and men. The findings were surprising: men only experienced higher levels of anxiety and depression when they adhered to an unhealthy eating pattern (i.e. the “Western diet,” which consists of high amounts of processed foods, red meat, high-fat dairy products, high-sugar foods, and pre-packaged foods). Women, on the other hand, experienced “an inverse relationship between healthy eating and exercise and mental health problems,” said Dr. Begdache. The moderately healthy diet was not enough to maintain mental well- being for women.

Researchers can only speculate about the reasons for these find- ings, but Dr. Begdache believes that it may be due to brain connec- tivity: women have more connectivity in the regions of the brain that control emotions, the limbic system, and the prefrontal cortex – the communication between which is dependent on the myelin sheath, which turns over quickly in the brain. Nourishing the myelin sheath well may be why women require a larger spectrum of food compared with men.

It is becoming clearer that women, for both their brain health and mental health, need to pay close attention to diet, in addition to other lifestyle habits. “Every woman needs to know what they are at risk for, and when they’re at risk,” said Dr. Chin. More women die of Alzheimer’s disease than they do breast cancer, which some women do not realize, and menopause is a key moment.

OTHER STUDIES WORTH NOTING

Women seem to respond to food stimuli differently than do men, according to a review paper published in 2017 in Obesity Reviews, which posits that “in response to visual food cues, females, compared to males, showed increased activation in the frontal, limbic, and striatal areas of the brain.” The review concluded that while more research is needed, women may experience greater cognitive processing related to executive func- tioning, emotion, and reward when viewing food stimuli, which impacts obesity levels and therefore overall health.

Additionally, a 2014 Journal of Nutrition article found that emotional eating (i.e. eating energy-dense snack foods, chocolate, pastries, and the like), was linked to depression in women. Men, alternatively, who emotion- ally ate energy-dense foods were not found to be depressed. Researchers concluded that mental health status needs to be considered when recommending healthy diets, particularly in women.

To read the original article in Mind Over Matter Magazine, page 57, click here.

A nutrient that may help fend off cognitive decline